How much of what we eat today is food we wouldn't have considered a menu item 10 or 20 years ago? Perhaps quinoa. Sardines. Octopus. Gluten-free anything.

So, today I ask you to think about adding some green thresher shark to your diet--particularly if you live in Southern California, where it is abundant.

I learned about the shark from Tommy Gomes and Dan Nattrass of Catalina Offshore Products, a San Diego seafood wholesaler that strives for sustainability. They and owner Dave Rudie found that local swordfish fishermen tend to get the thresher shark as by catch. Unwilling to just discard it, the fishermen approached Catalina OP about buying it up to sell to chefs and walk-in customers. In fact, Rudie says, they've been selling it for over 12 years but the wholesale market dropped around 18 months ago when most supermarkets took it off their shelves due to pressure from environmental non-governmental organizations, or ENGOs.

One of the reasons ENGOs were protesting shark harvesting was due to something that's been in the news recently, fishing sharks only for their fins. While this barbaric practice has been illegal in California and banned to U.S. fishermen for years, it continues around the world. So, the big ENGOs have campaigned not only to stop shark finning, but to stop the sale of sharks for meat in California. Additionally, says Rudie, the Monterey Bay Aquarium set almost all shark species to a red rating, meaning they're overfished.

"But NOAA (the National Oceanic and Atmospheric Administration) does the science to understand if a species is over-fished and they found that the stocks are healthy," says Rudie. "The Aquarium of the Pacific was the first ENGO to stand up and support NOAA and the local fishermen by giving green thresher shark a good rating last year. And now the Monterey Bay Aquarium has also changed their rating to yellow." 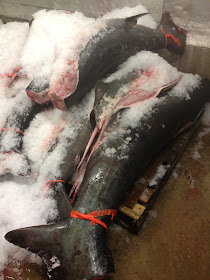 And, Rudie and Gomes both pointed out that these sharks weren't targeted for fishing, they were by catch. Unless they were sold, their bodies would be tossed back into the ocean.

At Catalina Offshore Products you can buy shark steaks or loins for $3.99 a pound. The fish is firm, like swordfish, with a clean, sweet flavor. They're perfect for grilling, baking, or broiling. Most of the fish is caught during swordfish season--August to February--but Catalina OP and others do freeze it and sell it as "re-fresh" or will make burgers or sausage.

In fact, in a collaboration between Catalina OP, Lisko Artisan Deli, and chef Chad White of Sea Rocket Bistro and soon Gabardine, a delicious green thresher shark sausage came to be. Catalina OP had the shark, Lisko had the sausage grinder, and White the recipe, which he's given to me.

Shark sausage is ridiculously easy to make and has a wonderful spicy smoky flavor. There are any number of ways to use it--and I'm hoping White will add more of his ideas below. But you can start by forming patties and pan frying them. Make a breakfast sausage and serve with toast and a fried egg. Form into a small sausage or hot dog shape and wrap in plastic wrap, then poach for a few minutes, unwrap, and grill. Keep it loose and saute with vegetables and add to pasta or rice or grains. Add to burritos, to stew. Basically use it as you would use ground meat, sausage, or hot dog -- only there's little fat to worry about.

1. Slightly freeze shark, slice into finger-width pieces and run through grinder (including Kitchen Aid grinder attachment set at largest grind at top speed).
2. Mix shark with the rest of the ingredients.
3. Shape mixture into patties or form into sausages and put into casings and steam. 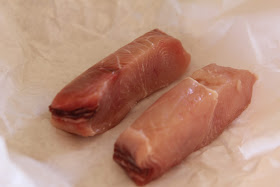 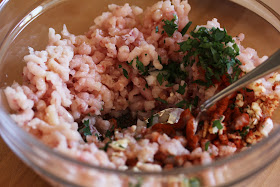 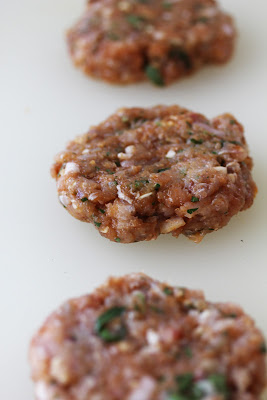